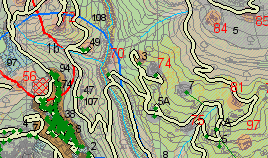 In prehistoric times, in the region to which the municipal borders of Massa and Cozzile belong, the bottom part of the hills, that bordered the basin of Fucecchio Padule, was sporadically populated by small and very small settlements of which, however, no trace remains in the surroundings of the current villages.
Some more certain news on pre-Roman age settlements in Valdinievole concern the comparison between Ligurian people and Etruscan people.
The first one occupied the northern area of the right bank of Arno river.
The Etruscans were forced to climb this river, keeping the left bank, crossing it in correspondence of Fiesole.

The Romans too, after the defeat of the Etruscans, had to deal with bellicose Ligurian peoples, winning only after a hard struggle that lasted for nearly half a century (239-171 B.C.)
As the Roman legions were advancing towards the North, they gained territories that were controlled encouraging the settlement of legionary veterans, especially in the areas located at the bottom of the heights.
The area where the land of Massa lies, was crossed by an important way of communication, Cassia-Clodia route that connected Firenze and Pistoia to Lucca and Luni.

The settlement of Massa has its origin from an ancient farm of the late age (iii- iv century A.C.). It was, perhaps, located where the first colonies of Veterans had been founded, at the time of the war against Ligurians and, probably, to be placed where today are the ruins of the country’s fortress, called “CATRIO”. During the Christian age, it arose, however, at the base of the present town, one of the most important and oldest parish of the Valdinievole.

In the Lombard and Carolingian era, until and after year 1000, the land of Massa and Cozzile was under Lucca’s influence and came under the control of one of the feudal families, heir of the Lombard “arimanni”. During the struggle against Byzantines, they controlled the border between Lombard Valdinievole and Pistoia that remained in Greek hands.

In the last years of the twelfth century and the early thirteenth century, in Massa was constituted a rural municipality, which, at first, was opposed to the feudal lords, later, it replaced them in the management of the local power, remaining under Lucca’s influence. It was probably around this period that the castle of Cozzile was founded and, from this period, the town received two names that even today still has.
Around at the end of the thirteenth century, the territory of Massa was embellished by Verruca castle, already of Pistoia, taken by Massa’s people and, subsequently, weakened and abandoned by its inhabitants who moved to Cozzile. The power and the influence of the parish church were scaled: Buggiano and Vellano detached from it and became independent parishes.

The sequence of tragic events following the Castruccio Castracani’ s death (1328) led Lucca to the loss of many territories of Valdinievole and, with them, the area of Massa and Cozzile. Taking advantage of its strategic location and its limited distance from the dominant city, it was able to obtain many concessions, privileges and a very large autonomy from Firenze.
In its territory was constituted an autonomous podestà with considerable skills in civil matters. It was formally dependent from the nearby Buggiano but, in fact, it was independent and remained like this until the end of the eighteenth century when it was finally united with Buggiano thanks to the leopoldine reforms.
Massa had its administrative independence: Massa and Cozzile remained an autonomous municipality under French government first, and then, under the restored grand duchy of Lorraine after 1814.

In ancient times, therefore, this territory was made up of three communities; as the symbols, that still appear on the municipal coat of arms, evidence: Massa is represented by an iron stick, Cozzile identified with a lily, and Verruca, already a Byzantine Roman military camp (CASTRUM), characterised by a Greek cross, whose trace survives today only in the municipal coat of arms.